A family of four decided to stop at Our Place Restaurant for breakfast as they were passing through Mansfield, Texas. The hostess seated the family of two adults and two children. As she did, the waitress saw that a tip had been left by the previous occupants. She didn’t want to bother the family right then, so she gave them a minute to settle in before coming back to the table to grab the cash.

However, when the server got back to the table to get her tip and to greet her newest customers, the cash was nowhere to be seen. Still, she didn’t think much of it. She assumed that it was stuck underneath one of the condiment holders found on the table. 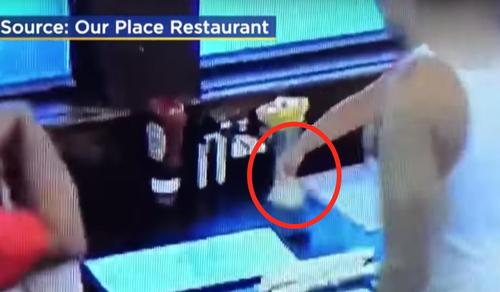 Benji Arslanovsk is the owner of Our Place. Later on, he and the waitress sat down to look through their surveillance tapes to find out where the missing tip actually went. They were shocked to find out what actually happened to it!

The surveillance footage showed that one of the kids picked up the five dollar tip and showed it to her parents. She then slipped in underneath her menu. You can tell the parents noticed what she was doing but didn’t try to stop her.

Benji was very upset to see the little girl so obviously steal the cash.

He believed that the parents were about to say something to her but did not.

Benji didn’t want to get local police involved, but he was eager to get justice for his server and his restaurant. He decided to post the surveillance footage to the Facebook page of the restaurant, hoping to “out” the family. He wanted them to come back and give the tip back to who it rightfully belonged to.

Are you ready to watch this sneaky family in action? Check out the video below and see for yourself how well his plan worked!

Have you ever seen something like this? We here at APost were shocked! Let us know what you think, and show this to a friend if you think the family got what they deserved.